During the summer, I am busily growing veggies and standing on sentry duty for hungry moose sneaking a snack. I have NO problem running “Mama” off with a rake in hand. Crazy? Maybe. BUT…considering gardening in Alaska means all most all plants need a three month head start before they ever see REAL dirt.

Warm weather fruits and vegetables need to grow in a greenhouse. This is where I grow my Sugar Pumpkins, THE favorite.  🙂

This year was the first year I had great success with these little buggers. In addition, I used a vertical gardening method to keep the vines from taking over the floor space. 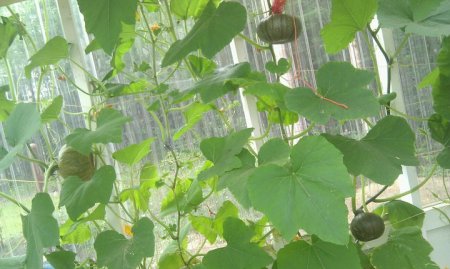 Taking over is a drastic understatement, and growing them upright was the ONLY way to go! With fruit set, these vines still grew to 25ft, weaving in and out of the rope lattice I’d threaded across the ceiling.

This year they’re NOT growing past 10 ft…I’ll nip that in the bud!

Figuring it will save more energy for production. 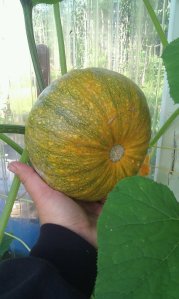 Love them!!! It’s an instant gratification thing. They grow SO FAST!

I spend a lot of time in my little Garden of Eden. Some people look at me funny as I climb up and down the ladder, hand pollinating the babies.  LOL 🙂

BUT someone has to love growing veggies or the rest of ya’ll would STARVE! 😀

Not to mention they make the CUTEST Halloween and Thanksgiving decorations……Easily lasting that long, and longer, without any preservation assistance.

I still have four sitting in my garden window, too small to bother processing, but serve as a nice reminder of summer. 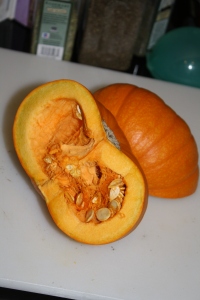 Here you can see the FAT little seeds I saved for the 2012 garden. Given that I purchased open-pollinated seeds originally, the organic growing methods and hand pollination I am relatively assured these seeds will produce a like…off-spring???

After cleaning all the gunk out of the middle, I lined a large roasting pan with the pumpkin, cut side down. They get about an 1/2 inch of water to soak in, a tin foil cover and “steam bath” for about an hour in a 350* F oven. 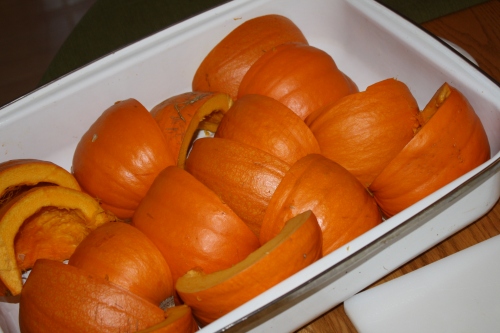 With pumpkins in the oven, I turn back to the seeds I plopped in a bowl. Wash off all of the orange….guts…..brains….whatever you call them. It’s not as time consuming as it might seem. 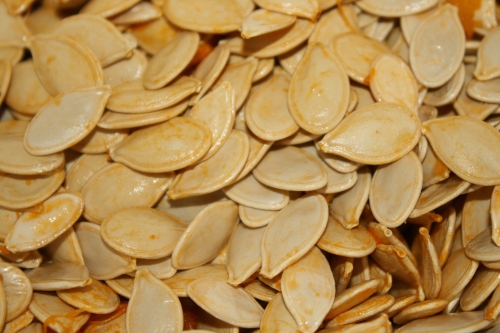 Well….I thought I took a picture of CLEAN seeds but apparently NOT! That’s what I get for burning through files, deleting pictures willy-nilly.  lol

Needless to say, after a simple wash, spread them on a sheet of foil to dry. This is a great activity to involve the rugrats.   Word of advice, do not use paper towel, they stick to the towel and are a b**** to get off.  Spritz the towel down with water and start all over. Learned this one the hard way.

These little guys will be bone dry and ready for storage in about 24 hours assuming a relatively dry home. Alaska happens to be classified a desert, so you might have a little longer. They should be mixed every few hours to dry consistently.

You can also try a dehydrator, but I would ONLY use one designed with an adjustable thermostat set to less than 100*F anything above that and you will kill the seed. ***think bath tub temperature for a kid***

Once the steamed pumpkin is out of the oven, remove the cover and allow them to cool down.

Masochistic behavior IS the sign of a true whack job…regardless of what your husband might tell you. ***giggle***

With clean pint jars waiting on the cutting board, I start sterilizing.

Do not forget to put your lids and rings on the stove to heat up.

Sterilizing back in the day meant standing over the stove turning jars in a pan of boiling water. Burning the hell out of your fingers if you were too cheap to own a pair of tongs.

…if I have my timing down, the jars would be just finishing a quick cycle in the dishwasher with the “heat dry” on.

****My Mummy LOVES the dishwasher trick; she’s been standing over the stove canning veggies for a millennium. :D***

Instead… I happen to be fortunate enough to have an “Insta-Hot” tap at my sink, therefore I just spin the jars through that boiling water and VOILA!!!

…past the recommended fill line, as you can see, ‘cuz I’m a rebel like that.

I’ll have you know, although I joke around, I’ve NEVER blown anything up!

Weeeeelllllll, except for that one time…

Juuuuuust Kidding!!!!! It was just the blender. 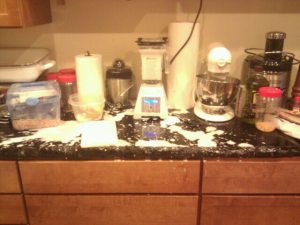 BACK TO THE ORANGE SQUISH…

With 2 quarts of water in the bottom of the cooker, I start it on low with the lid OFF while I’m running in circles.  This cuts the time waiting for everything to heat up so I can start “venting”.

Jars filled, hot lids screwed down with rings, and into the pressure cooker they all go.   Cook at 10 lbs of pressure for 60 minutes. 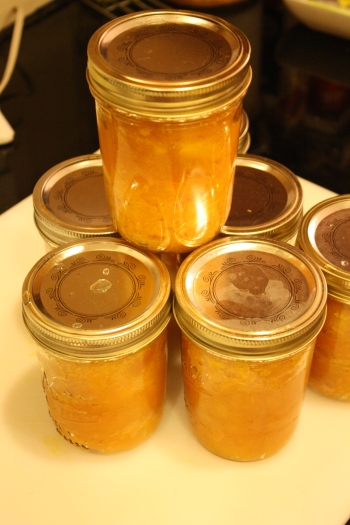 For the seeds….my first batch turned out beautifully.  Air dried by hand. I even designed a cute little seed packet in Word and printed it on leftover card stock.

They’ve been living in the freezer for months. 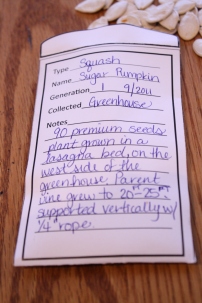 Second Batch….much like the second child…. back to the basics: get the job done!

They have been stored in the jar, on a shelf, in my pantry. This, I believe, was the first machine dehydrated batch. Relatively same  results as the first; beautifully fat clean white seeds.

The third batch was taken from a commercial field pumpkin. Stored in a jar….air dried by hand, I think.

When I removed them from the fridge condensation had built up in the jar and low and behold….Black Mold!  That’s what I get for rushing the process.

In a nutshell…..either leave them out to dry (forgetting about them for a week)  OR use a dehydrator…..AND LABEL EVERYTHING!!!

Posted in Cooking, Now what the hell do I do with it???, Organics, Permaculture, Sustainable Living